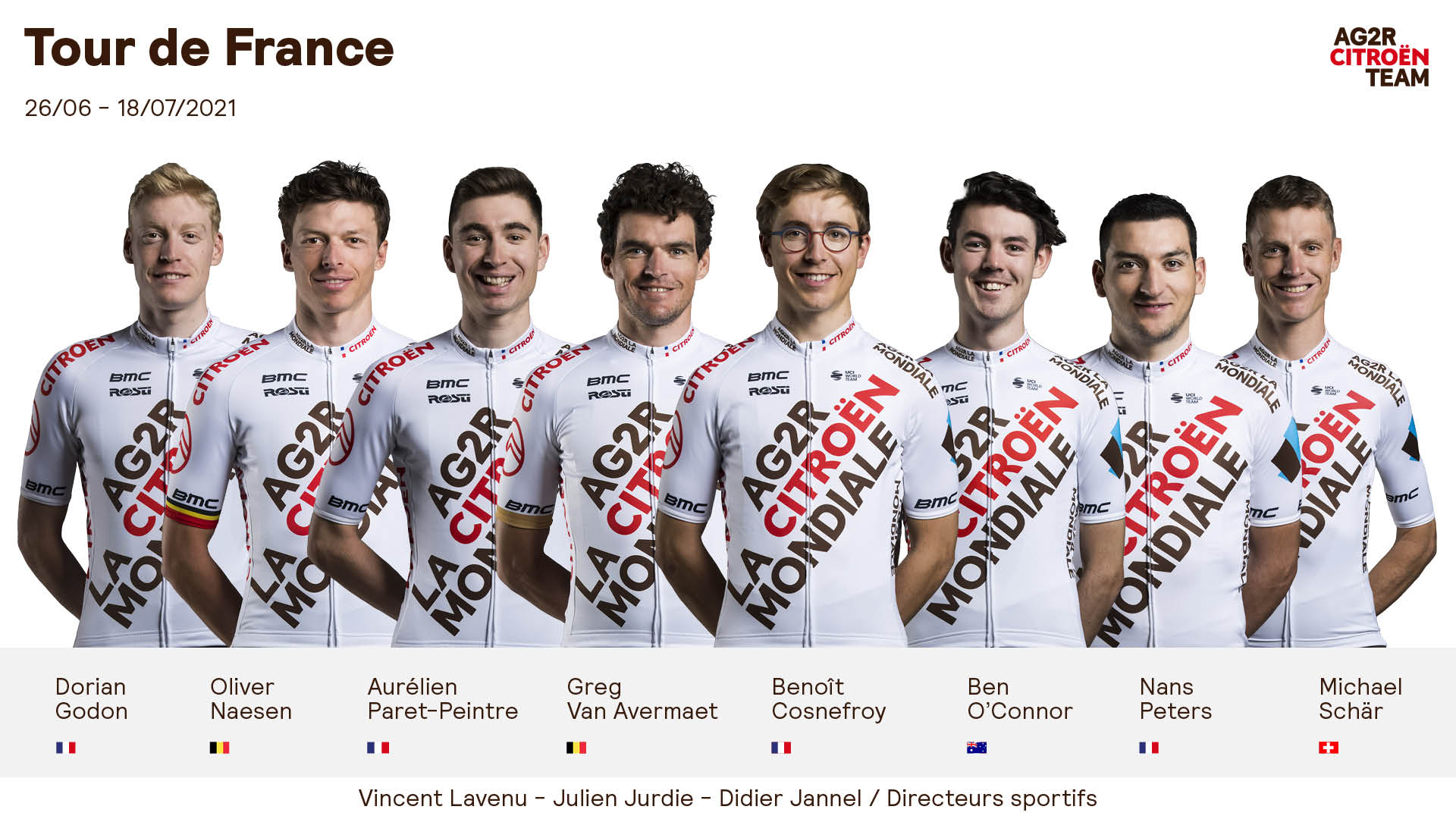 Following the various national championships that were raced this weekend, the general management and the sports directors of the AG2R CITROËN TEAM have decided to give the three remaining places on the 2021 Tour de France (June 26 – July 18) team to Dorian Godon, Nans Peters and Michaël Schär.

Vincent Lavenu: « We have an attractive team »

“Dorian Godon, Nans Peters, and Michaël Schär have proven to us in recent weeks that they deserve their place at the Tour de France. We know their qualities as fighters and their aptitude to seize their chances. Our team has an attractive face, between young wolves and experienced riders, which should allow us to shine throughout the next three weeks. We certainly have to remember Bob Jungels, who was to join us, but will now take time to recover and will return to racing with all his qualities of a champion capable of winning races.”

“After a start to the season that was thwarted by knee pain, Benoît has regained his best level thanks to his fighting temperament.We know he can bring us great joys and be one of the top French riders for the Tour de France 2021.”

“Dorian is talented and is constantly improving. His victory at Paris-Camembert is what finally convinced us to bring him. He deserves to race the Tour de France which will be an enriching experience for the rest of his career. He is already able to shine at this level.”

“Oliver has been a part of the team since 2017 thanks to his talent and good humor. He has often finished highly placed in stages and has also been invaluable when we have needed to position and protect our leaders at key moments. This will again be an important attribute when we are crossing France from east to west in the first week.”

“Ben is a very talented rider who has shown great things in tough races like the Tour de Romandie and the Critérium du Dauphiné. We already knew his qualities as a rider, especially since he won a stage last year at the Giro. Subsequently, though, we have found him to be a delightful man who should certainly shine in his Tour debut.”

“Aurélien will ride his first Grande Boucle after having had a very encouraging first part of the season, which included a victory at the GP La Marseillaise. He will go with the general classification in mind, but without setting a specific goal. We will count on him being strong in the mountains, and who knows, maybe be able to go for a stage victory.”

“Nans has had a lot of health problems this year, but he has regained a very good level which has enabled him to secure his place at the Tour de France.
His sense of teamwork, his love of the team, and his temperament should allow him to be very much an asset.”

“Michaël is a luxury teammate. One of the best in the bunch. He will support his teammates in the tense moments of the race while also being able to get into a breakaway and go for a stage victory.”

“Greg came to the team preceded by his reputation and immediately fit in with ease. He has already won stages and worn the yellow jersey at the Tour. This will again be his goal with us, while also playing the mentoring role of “older brother”, which is a role he does wonderfully.”

Dorian Godon, Ben O’Connor, and Aurélien Paret-Peintre will all participate in the Tour de France for the first time.