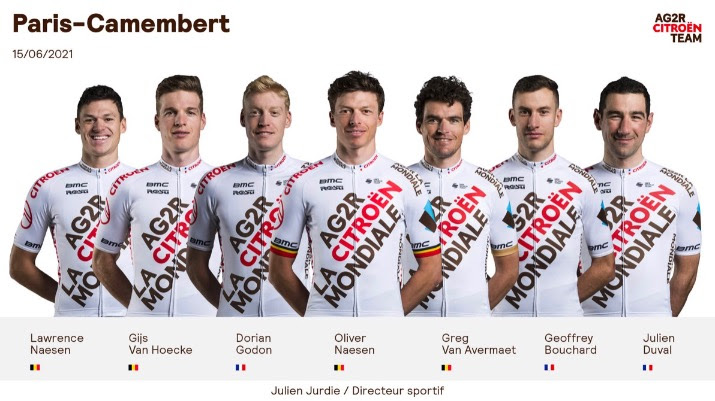 « Paris-Camembert is a motivating race. I am going to be doing it with the group of “Flandriens” and that will be a lot of fun for me. With Greg Van Avermaet, Oliver Naesen and Dorian Godon, we have a great team. I don’t really know what shape I’ll be in. Since returning from the Giro, I have had some ups and downs. After this race, there will only be the French Championship on Sunday before taking a break. I will return to competition on July 31st at the Clasica San Sebastian to prepare for the Vuelta a Espana (August 14th-September 5th). I realized at the Mont Ventoux Dénivelé Challenges that taking the climber’s jersey at the Giro has caused my rating to rise a little in the public eye. I was even recognized last week as I was walking around Chambéry.»Geoffrey

The AG2R CITROËN TEAM has won the last two editions of Paris-Camembert with Benoit Cosnefroy (2019) and Dorian Godon (2020). Lilian Calmejane, who now wears our colors, won in 2018. “It’s a beautiful memory. You don’t win that often as a cyclist and this success proves that it is important to be aggressive and opportunistic,” said Dorian Godon. In 1992, the year the team was founded, Patrice Esnault snatched one of the first successes of the Chazal team at that race.

Lilian Calmejane, Julien Duval, Alexis Gougeard, Anthony Jullien, Lawrence Naesen, Marc Sarreau and Gijs Van Hoecke will be taking part in a training camp at Vaujany, in Oisans, which is one of our team’s partners, from July 7th to 14th under the direction of Alexandre Abel in order to prepare for their goals throughout the second part of the season.