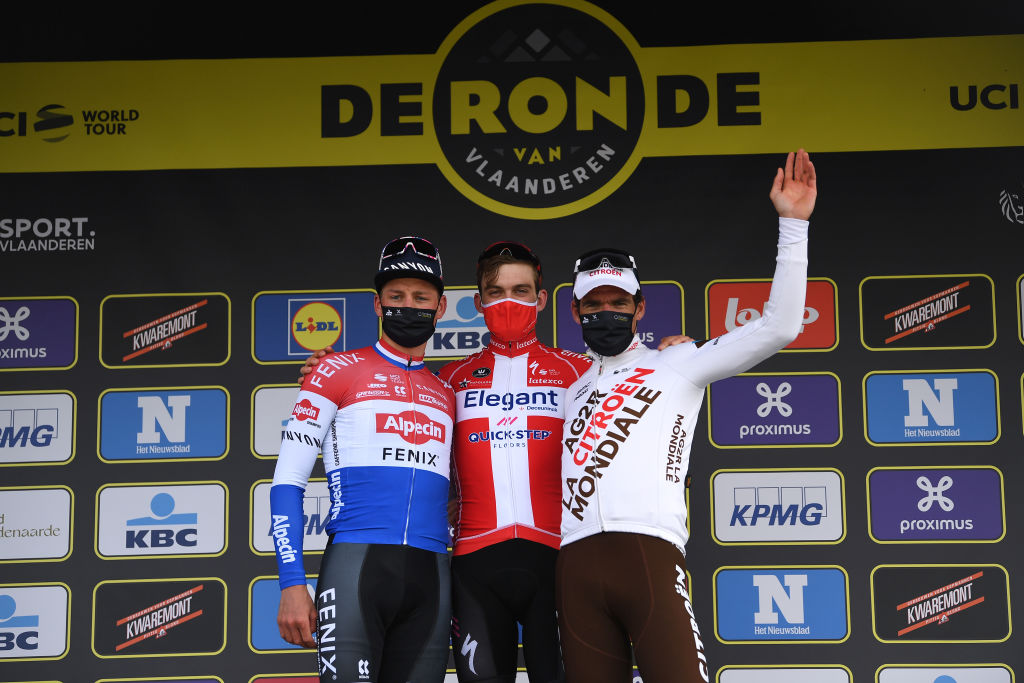 GREG VAN AVERMAET : “This was the goal for the race”

“Even if I did not have the same legs as in A Travers la Flandre (Dwars door Vlaanderen) on Wednesday, I managed to be at the front in the end. With my experience in this race, I succeeded in getting onto the podium. I know that at a classic like the Ronde Van Vlaanderen after 254 kilometers of racing, I still have resources at the end. The podium was the goal for the day, so I have no regrets today. I am happy to take my first podium at AG2R CITROËN TEAM, which has invested a lot in the Flanders classics. The whole team worked well this winter, we are happy to race together, and we work well together.”GREG VAN AVERMAET

“We went through all the emotions today. The team was well placed in the first kilometers. The DQing of Michael Schär destabilized the group. Nevertheless, Greg never gave up. He was always racing at the front. He knew how to plug the holes to get back into position. He showed again today what a champion’s character he has. We were going for our first podium at this race, and it was a great day to be involved! After having taken podiums at E3 and Gent Wevelgem, we manage now to include ourselves among the top three in the world’s greatest classic. We can be proud today, and it gives us a lot of motivation for the future.”JULIEN JURDIE

Since 2014, Greg van Avermaet has participated seven times at the Ronde Van Vlaanderen. He has finished four times on the podium. Second in 2014 and 2017, he finished third at the 2015 edition and now again 3rd in 2021.

Third for Sarreau at the Roue Tourangelle

Marc Sarreau earned his first podium of the season by taking 3rd place at the Roue Tourangelle, the third race in the Coupe de France series. “With the wind, it was pretty tense all day. Despite this, we had a good race as a team. And on the line, I simply was beaten by two riders who were faster. This is my first podium of the season. My form is not yet optimal, but it gives me motivation for the future. ”
In the ranking of the Coupe de France, Aurélien Paret-Peintre is 3rd (and the best young rider), while Marc Sarreau is 5th. We are still in the lead for the team classification.