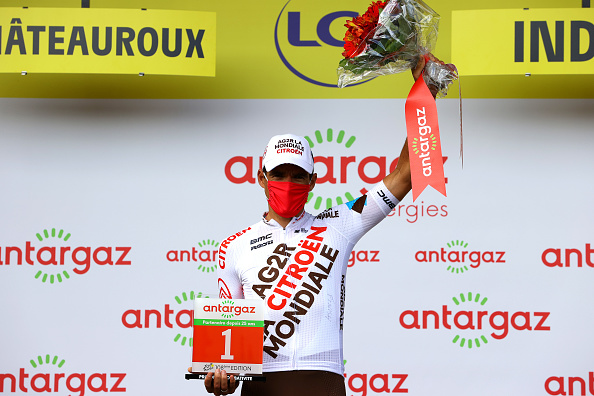 «There was a nice group of eight breakaway riders, and it could have gone a long way but in the end not everyone had an interest in riding. So, I attacked on my own; luckily I was joined by Roger Kluge. We worked well together. I gave my best shot to go as far as possible. We were around 40 seconds ahead for a long time, but with a peloton in hot pursuit, and the sprinters determined to face each other before the more difficult stages to come, in the end it was not possible. I’m glad I was able to get on the podium for the most aggressive rider prize.»Greg

After Michaël Schär was named the most aggressive at the end of the third stage, Greg Van Avermaet is the second rider from the AG2R CITROËN TEAM to receive the prize for most aggressive rider so far in this Tour de France.

As part of the Vivons Vélo day, the team members will ride Saturday, July 3, between Oyonnax and Le Grand-Bornand for a good cause. The 1208 kilometers they will cover will be matched by our title partner AG2R LA MONDIALE as a donation for the Institut Pasteur. In addition, gatherings which are open to all, will take place throughout France to make it possible to participate in this cause just like our riders. That means that all the kilometers covered by cycle tourists this Saturday for this cause will be matched as a donation by AG2R LA/ MONDIALE for the Institut Pasteur. If you are interested in participating, you can find the meeting points for the rides on the www.vivons.fr website. www.vivonsvelo.fr/evenements/